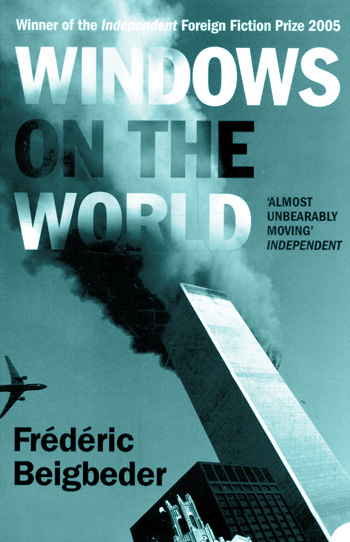 “Windows on the World” won the 2005 Independent Foreign Fiction Prize

A daring book in that it weaves fact and fiction, empathy and dark humour, autobiography and intellect, Windows on the World, if it is not always entirely successful (especially in the more autobio-graphical moments) it  is a fierce, furious, infuriating chronicle of human iniquity and human suffering, and a  humane attempt to describe the indescribable. As Beigbeder himself said “The only way to know what took place in the restaurant on the 107th Floor of the North Tower, World Trade Center on September 11th 2001 is to invent it.”

Praise for Windows on the World

‘For a contemporary French writer to take up the challenge of fictionalising the very moment that turned the world upside down was courageous in itself: the bonus is that this novel – cleverly executed and beautifully translated by Frank Wynne – forces us to face the unfathomable in a new and unexpected way.’
Jean-Philippe Imbert, Irish Times

‘Beigbeder doesn’t expand on the enormous spectacle of destruction. Instead he tries to imagine his way into those hidden places, by representing the dead as if they were speaking from beyond the grave […] deployed to some effect by Alice Sebold in her novel The Lovely Bones, and it’s no less powerful in Beigbeder’s hands …quietly devastating … affecting and disconcerting ‘
Financial Times

“You know how it ends; everybody dies.” The opening sentence is bracing, and sets the tone. In the same way that the films of Jean-Luc Godard are not really stories photographed, but a record of actors playing parts, Beigbeder’s direct address to the reader – sardonic, brattish, drillingly autobiographical, with a constant undertow of breezy self-loathing (“Will I be able to look myself in the eye after publishing this book?”) – has the distancing and cooling effect that makes his material nearly bearable.
Beigbeder is certainly modish. He tries to pre-empt criticism by taking endless pops at himself, like Dave Eggers. He is gleefully non-PC, like Michel Houellebecq. He drops blurry photographs into the text, confusing fact and fiction, a trick picked up from WG Sebald. But he is never sanctimonious or emotionally conniving.
Beigbeder recognises that the great majority of us have no personal connection with the thousands who died in the attack. As Frank Lentricchia and Jody McAuliffe write in their excellent book, Crimes of Art + Terror: “We never really did, or ever really will, grieve for them, though we may think we do so in the world made by Oprah, where human beings assume God’s role of feeling everybody’s pain.”
The Independent

“Eight pages into his new novel, Frédéric Beigbeder explains why he has written it. “Since September 11 2001, reality has not only outstripped fiction, it’s destroying it. It’s impossible to write about this subject, and yet impossible to write about anything else. Nothing else touches us.” You might dispute this – is there really no other subject that has touched us in the past three years? – but you have to admire Beigbeder’s insistence on his artistic duty to tussle with the most vital issues of the age.”
Josh Lacey, The Guardian
“There are a clutch of terrifically poignant images and some unpleasantly graphic ones, and Beigbeder makes it easy to experience the horror and pathos afresh.
In the other half, Beigbeder is sitting in the restaurant at the top of the Tour Montparnasse in Paris, a hip young French intellectual doing his research, musing on culture, religion, architecture,democracy and the relationship between his country and America, and the ambitions and failings of his own novel. He concedes that his prose appears powerful because he’s used tragedy “like a literary crutch”. “I truly don’t know why I wrote this book,” he says. “But what else is there to write?” It’s enough, I think, that he’s made the gesture – a genuine attempt to experience and understand the pain of that day.”
The Independent