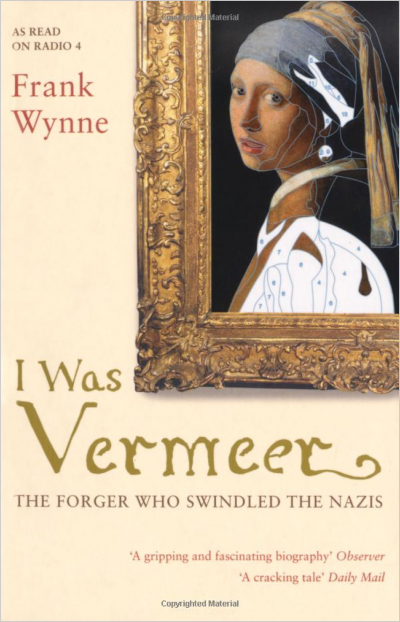 In 1945, a small-time Dutch art dealer was arrested for selling a forgery of a priceless national treasure – a painting by Vermeer – to Herman Goering, Hitler’s right-hand man. The charge was treason, the only possible sentence death. And yet Han van Meegeren languished in his dank prison cell, incapable of uttering the words that would set him free: ‘I am a forger.’ This riveting account of greed, hubris, excess, treason and fine art is the story of a failed artist and the greatest forger of all time, who executed a swindle which earned him the equivalent of fifty million dollars and the acclaim of the very critics who had mocked him.

“I Was Vermeer” was serialised as Radio 4 Book of the Week (read by Anton Lesser). It has been translated into various language, including Italian, Japanese, Portuguese and Polish.

Praise for “I Was Vermeer”

‘[a] gripping and psychologically fascinating biography…’ – Edward Marriott, The Observer
`A gripping account of the life of van Meegeren, a tale of cunning and deceit that unfolds with all the tension of a thriller’ — Irish Independent`A study in the psychology of forgery, enfolded in a fabulous life story … a skilful book’ — Times Literary Supplement
`Van Meegeren’s story is fascinating and deserves to remain in the public consciousness’ — Michel Faber, Guardian
`Wynne retells the story with brio, producing the genuine article: a page-turning read to while away the days’ — Sunday Times
`Wynne’s well-researched account of van Meegeren’s life is a fascinating, thriller-paced read and a well-aimed indictment of the world of art criticism’ — Metro
Frank Wynne