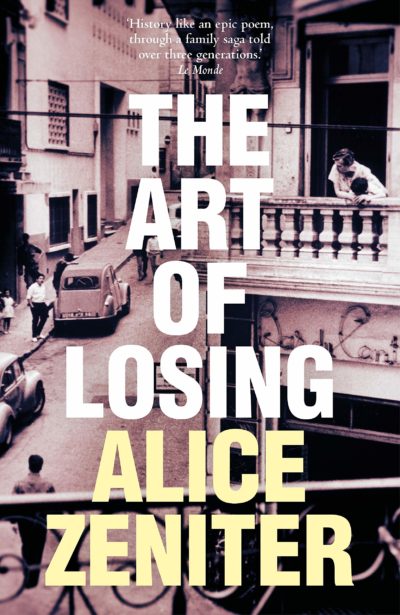 Naïma has always known that her family came from Algeria – but up until now, that meant very little to her. Born and raised in France, her knowledge of that foreign country is limited to what she’s learned from her grandparents’ tiny flat in a crumbling French sink estate: the food cooked for her, the few precious things they brought with them when they fled.

On the past, her family is silent. Why was her grandfather Ali forced to leave? Was he a harki – an Algerian who worked for and supported the French during the Algerian War of Independence? Once a wealthy landowner, how did he become an immigrant scratching a living in France?

Naïma’s father, Hamid, says he remembers nothing. A child when the family left, in France he re-made himself: education was his ticket out of the family home, the key to acceptance into French society.

But now, for the first time since they left, one of Ali’s family is going back. Naïma will see Algeria for herself, will ask the questions about her family’s history that, till now, have had no answers.

Spanning three generations across seventy years, Alice Zeniter’s The Art of Losing tells the story of how people carry on in the face of loss: the loss of a country, an identity, a way to speak to your children. It’s a story of colonization and immigration, and how in some ways, we are a product of the things we’ve left behind.

Praise for The Art of Losing

A Most Anticipated Book of 2021: The Millions, The New York Times’ “Globetrotting”
Winner of the Prix Goncourt des Lycéens
Winner of Le Monde‘s Literary Prize
A Sunday Times Translated Book of the Month Pick

“Ms. Zeniter’s extraordinary achievement is to transform a complicated conflict into a compelling family chronicle, rich in visual detail and lustrous in language. Her storytelling, splendidly translated by Frank Wynne, carries the reader through different generations, cities, cultures, and mindsets without breaking its spell… With The Art of Losing, Ms. Zeniter shows fiction’s power as a hedge against loss of the past: the art of regaining.”
―The Wall Street Journal

“Remarkable… superbly handled… It speaks urgently to our times.”
―The Sunday Times

“Visceral… An incredible [book]… that requires rapt attention. It is a novel that scales the walls of history and excavates lessons with curiosity and anger.”
―The Observer

“This pacy, complex piece of historical fiction… explores the tangled reality of identity.”
―The New Statesman

“France, like Britain, hardly lacks for migrant fictions now, but Zeniter traces their lonely passage exceptionally well. Her fine-grained scenes unroll into a grander historical canvas. The translator Frank Wynne, in another stellar outing, stylishly catches both her intimate and epic notes… With its panoramic vision and generous spirit, The Art of Losing finds shoots of hope amid the stony landscapes of the past.”
―The Spectator

“Absorbing… as Chimamanda Adichie did in Half of a Yellow Sun, and Yvonne Adhiambo Owuor with Dust, Alice Zeniter joins the ranks of these authors in filling silences, whether individual or collective.”
―The East African

“Both a classic tale of the immigrant experience and a meditation on how that experience reverberates through generations of a family.”
―Booklist, starred review

“In Zeniter’s ruminative latest (after Take This Man), a French Algerian woman unearths her shrouded family history and reckons with the question of what constitutes a homeland. … Zeniter skillfully demonstrates the impact of colonialism on family, country, and the historical archive. With nuance and grace, this meditative novel adds to the understanding of a complex, uncomfortable era of French history.”
―Publishers Weekly

“The best book I read in 2020 . . . Through this masterful novel, [Alice Zeniter] created space for thinking through nations, politics, family, love and transmissions, while bringing some much-needed nuance and humanity to this period of our recent history.”
―Bad Form

“The Art of Losing is an exceptional novel, a masterful meditation on the negative space of history. With surgical control and deep emotional precision, Alice Zeniter tells the story of a family at once severed from and forever tethered to its past, survivors of colonialism’s residual wreckage. There is about this book the sense of literature’s great upending power, a brilliant light cast on the lives of those who, in the grand current of geopolitics, would otherwise be confined to shadows.”
―Omar El Akkad, author of American War