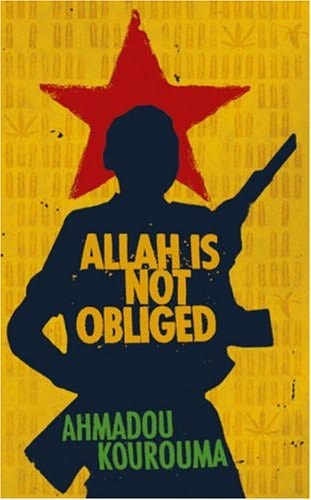 Ahmadou Kourouma’s final novel, Allah is not Obliged, – written for and dedicated to the children of Djibouti – is the tale of a child-soldier, Birahima, who, when his  mother dies, leaves his native village, accompanied by the marabout and con man  Yacouba, to search for his aunt Mahan. Crossing the border into Liberia, they are seized by a rebel force and press-ganged into military service. Birahima is given a Kalashnikov, minimal rations of food, a small supply of dope and a tiny wage. Fighting in a totally chaotic civil war, and alongside many other boys, some no older than he, Birahima sees death, torture, amputation and madness, but somehow manages to retain his own sanity…

Praise for “Allah is not Obliged”

“Despite such grave material, Kourouma’s writing is stylistically inventive, even playful. (…) It isn’t only the painful subject matter that makes this book so challenging to read. If all of Ahmadou Kourouma’s fiction it is the least interested in narrative, as opposed to narration. (…) Allah Is Not Obliged is not so much a novel as a bravura monologue on the atrocities of West Africa’s recent history.”
Anthony Cummins, Times Literary Supplement

“Kourouma is one of Africa’s pre-eminent novelists, and one of the few who has not been content to rest on his laurels. His last novel, Waiting for the Wild Beasts to Vote, published in France in 1998 and the UK in 2001, quickly became a bestseller. Allah Is Not Obliged seems almost certain to achieve the same level of distinction. Written entirely in the convincingly realised voice of Birahima, it is a powerful, shocking and deeply moving novel, an African Lord of the Flies.”
Aminatta Forna,  Guardian

Melding fiction and fact with the humility of childhood, Ahmadou Kourouma deftly exposes the desperate nature of the civil wars – and the relentless poverty – that have ravaged Africa, and brings the grandeur of gestures such as the G8 pledges into uncomfortably sharp relief.
Sarak Birke  New Statesman

“The first-person narrative deftly captures the mixture of horror, fascination and detachment with which a child views the world of grown-up folly.”
The Economist

“It is not only the gruesome plight of African small soldiers that has made this story resonate with the public. As in his previous novels, Kourouma takes liberties with syntax and writes in an Africanized French that is bizarre, cruel, and inventive; he enticed the French public with his new uses of the language. (…) It is a novel that, even if its realism brings readers to the heights of cruelty, does not remain any less magical or captivating.”
Rémy Ourdan, Foreign Policy