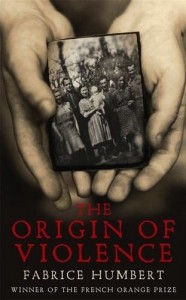 During a school trip to Buchenwald concentration camp, a young French teacher comes across a photograph of a man whose resemblance to his own father, Adrien, is uncanny. However, the man has a different name and died in 1942. Returning to France, he finds that the memory of the photograph refuses to leave him. He decides to embark on a search for its subject, which takes him to the Buchenwald archives, to the heart of the Nazi machine, but more disturbingly, draws him into the dark heart of his own family. Eventually, he is brought face-to-face with his own capacity for violence. A subtle, moving book, The Origins of Violence shows the limitless ways in which humans inflict harm on each other, and how individual people, not societies, are the perpetrators.

This is a highly intelligent and moving novel, dealing with a huge theme with perceptive sympathy. It is not merely about “the origin of violence” as the title suggests, but about its attractiveness. […] Humbert’s novel has a strong plot, a compelling narrative with twists and turns, and a strong, surprising conclusion. It is, among other things, a crime novel, and a very good one. Like all serious crime novels it deals with the pathology of the human condition, and its theme is moral and intellectual corruption.

Yet what gives this novel its peculiar distinction is, first, the quality of its speculation and argument, and second its disturbing recognition of how easily people may respond to the attraction of evil and destruction, while others, “pale, faceless men’’ – bureaucrats – “who bring order and misery to a nation” may deal out death with a stroke of the pen and experience no guilt.

This is a novel of rare scope, substance and strength. The translation by Frank Wynne reads well and does justice to the remarkable original.