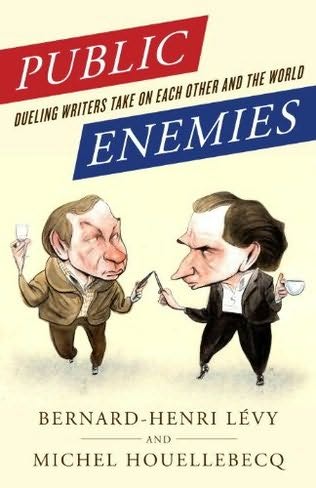 Bestselling novelist Michel Houellebecq, and bestselling philosopher Bernard-Henri Lévy (‘BHL’), are two of the most celebrated and controversial intellectual figures in France today. In Public Enemies they clash head on in an awe-inspiring, hilarious and revealing battle of the literary titans. ‘Everything separates us from one another, with the exception of one fundamental point: we’re both utterly despicable individuals.’ (Houellebecq to BHL) In 2008, two of the most celebrated of French intellectuals Michel Houellebecq and Bernard-Henri Lévy (‘BHL’) began a ferocious exchange of letters. Public Enemies is the result.

This is, as you may have already recognised, a very French book. It is hard to imagine a British equivalent – who would we end up with? Irvine Welsh and Alain de Botton? What keeps you reading, beyond the confessional drama, is the sheer one-upmanship in the range of reference and playfulness of expression. At one point, the sparring philosophers direct their attention to the future of the French economy: given its terminal decline as an industrial power, what are the nation’s remaining world-class attributes? Duck confit, Houellebecq suggests, and romanesque churches and raw-milk cheese. To this list he might have added the original gift of the French enlightenment, the tradition of memorable after-dinner conversation, to which this volume is an exceptional, and enjoyable, addition.
Tim Adams, Guardian

“However rich in irritations, this is a book that you don’t stop reading. You can skip some of Lévy’s pirouetting (Houellebecq sometimes admits he’s baffled) but not the rest of these lively, fluently written exchanges. There is fascinating stuff on their childhoods (Houellebecq hates his mother and she him; Lévy’s rich dad, a North African Jew, began humbly) but it’s the free-form rooting around by two un-stereotyped minds that is compelling.”
George Walden, The New Statesman

“Dear Messieurs Houellebecq and Lévy … Epistolary novels are difficult enough to bring off; epistolary epistles can be deadly, especially if the writers are writers. See novelist Thomas Mann’s exchange with social theorist Theodor Adorno if you ever have trouble sleeping. To your credit, you manage to keep us awake through all your preening and puffing, soul-baring and name-dropping. Your countrymen were certainly amused, making Public Enemies a 2008 bestseller in France. It is now available in Britain, where you are not yet sufficiently well known to be disliked. This book may fix that problem.“
Donald Morrison, The Financial Times

“Their book is a minor event (few real sparks fly), but it is flecked with incidental pleasures. It should be no surprise that Mr. Lévy, who stands for reason and engagement, loses this battle of wits against Mr. Houellebecq, who stands for almost nothing … Mr. Lévy struggles to drag this conversation out of mud and self-pity, to discuss philosophy and literature and politics. But he ends up exulting, defensively, about the protests he’s led, the film juries he’s headed, the women he’s bedded. A not untypical observation from Mr. Lévy: “I also liked,” he writes, “having been one of the very, very few to have succeeded in traveling through the bush on board an improbable sort of rickshaw into the heart of the Nuba Mountains among people who hadn’t seen a white person since Leni Riefenstahl.””
The New York Times  Dwight Garner