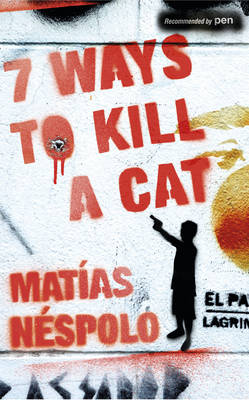 “Translating a novel like this, full of tough talk, is an enormous challenge. Frank Wynne does it wondrously well…” Independent

As tense as a thriller as vivid as an undercover documentary Matias Nespolo’s bold and brilliant first novel takes the reader on a rollercoaster ride through a place of crime and deprivation. Set in Buenos Aires at the time of Argentina’s financial crash and seen through the eyes of twenty-year-old Gringo it tells the story of two boys on the cusp of adulthood who have no choice but to join the gang warfare that rules their community.

At least Gringo’s friend Chueco thinks they have no choice. He’s determined to prove himself hard enough to get into El Jetita’s gang but smart enough to remain his own man. Gringo is more intelligent. He knows that gangs don’t work like that: you obey the leader or else. As the two get drawn ever deeper into a pitched battle between El Jetita and his rival Charly over control of the barrio’s drugs and prostitution Gringo sees a life of love and loss pass before his eyes. A few days before he was joking with Chueco about killing cats. Now he’s fighting to save his skin. Written in the street-slang of the slums and full of fantastic characters from the sympathetic Gringo to the ruthless gang leader El Jetita or the grotesque bar owner Fat Farías this is one of those novels that is about one place and every place. While its depiction of Buenos Aires rings vibrantly true in every detail the barrio could be any place of urban deprivation where young men are pushed into a violence that ultimately will destroy them.

Néspolo draws great characters – the slobby Fat Farías, his daughter Yanina, Gringo’s friend Quique – and a series of brilliant scenes. The best, though, is how he expresses feelings and personality through dialogue. Translating a novel like this, full of tough talk, is an enormous challenge. Frank Wynne does it wondrously well, boldly using many Spanish terms, such as nicknames and slang. He doesn’t make Argentinean street kids say “mate” or “bro” instead of “socio” or “che”.

Néspolo’s novel bears comparison with such masters of description of life in the slums as Alexander Baron and Nelson Algren, though the tone falters when Gringo starts to read Moby Dick. Here, Néspolo fails to draw analogies with Ishmael and Captain Ahab but Seven Ways to Kill a Cat is still an excellent adventure story that also documents urban poverty and violence, with faultless dialogue and at breathtaking pace.

Book of the Week: Time Out

7 Ways to Kill a Cat – a startlingly strong debut from Buenos Aires-born, Barcelona-based Matías Néspolo – has all these elements, plus some Tarantlno-style fast editing, black humour and slcko-hilarious gun-toting slapstick. The pace, plotting and characterisation are impressive: super-slob bar owner Fat Farias, the two curvy Loli-Latinas Yanina and Pampa and chief pimp and all-round scumbag El Negro Sosa all strut through the pages fully realised. But even better is the banter between 20-year-old Gringo – your classic coming of-age narrator: bad but not beyond saving –and Chueco, his best amigo and a double-dealing Janus who is doomed to fuck up when he involves them both in a taboo criminal act right inside the shanty town. Frank Wynne’s wily translation captures the swaggering rhythms of Argentinian lunfardo (the old prison slang most kids still speak) and leaves be any words that work better in the original.

Thanks to Chueco’s misguided machismo the two friends find themselves taking on local lowlife legend, gang leader El Jetita, and – courtesy of a neat and nasty little subplot – unearthing traumatic secrets from Gringo’s family’s past. With bullets pinging across the tin roofs of the slum as two rival gangs face off over drug-dealing territory, and the December 2001 street riots and marches going on In the world beyond, Chueco has to work out how to escape Into a future other than the one his destiny seems to promise.

It is too premature to speak of a “new wave’ In Latin American literature – Borges, Vargas Llosa and Garcia Marquez et al are still regarded as role models and are undeniably mega-influences even on a young author-and there’s certainly still a pretentious and unreadable ‘literary’ clique in Buenos Aires. But Néspolo. if he hails from the educated middle-classes, seems open – and even anxious – to widen the register, write for a younger audience, and look at the ugly, dirty, non-European, unexportable side of Buenos Aires. This is a brilliant debut and as fast a read as any graphic novel you’ll come across -but with a lot more style and drama.