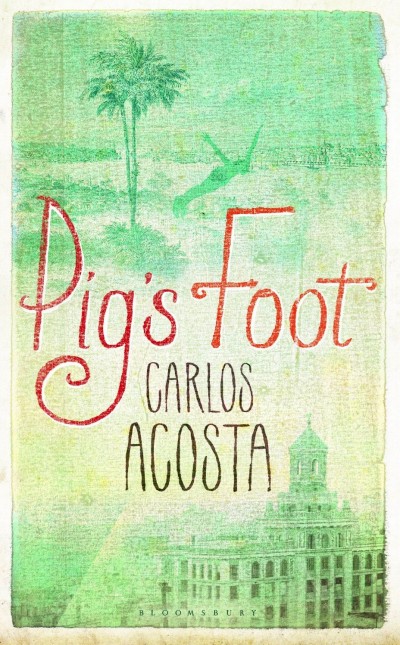 One day Oscar Kortico wakes to find himself utterly alone in the world. As the sole descendant of his family line he is not sure what to do or where he should go, but in the midst of this uncertainty, he holds fast to what his grandfather always told him: ‘No man knows who he is until he knows his past, the history of his country.’

As he sets out to find the lost village of Pata de Puerco and the meaning of the magical pig’s-foot amulet he has inherited, the search for his country’s hidden history becomes entangled with his search for the truth about himself.

Through a vivid, if not entirely reliable, retelling of the stories of his ancestors we live the tumultuous history of Cuba through Oscar’s eyes, from the arrival of slaves through the wars of independence, to Bacardi rum, dictatorship, revolution and, finally, to a freedom of sorts.

“As his terrific first novel shows, he also has a genius for telling a story. In the most colourful South American tradition, the events are often violent and tragic, but the prose is vivid, fast-moving and often dazzling, and he has a cynical eye for the awful comedy of everything … The pace leaves you breathless” –  Kate Saunders, The Times

“If you haven’t heard of Acosta, he’s ballet’s new Nureyev – but not only is he a dervish on the dancefloor, he’s also a dazzling storyteller … A tale that sizzles with atmosphere and a sense of place” –  Glamour

“Jumpy with incident and memorable characters such as Melecio, the child genius who extemporises poetry and designs the Bacardi building and logo, Kid Chocolate, the young boxer KO’d by Oscar’s grandfather and the bestial El Mozambique. A little pressure cooker of a novel” –  Daily Express

“In Frank Wynne’s skilful translation, Acosta’s novel has an earthy charm that makes it more than a mere literary curiosity” –  Sunday Telegraph

“A rich stew of magical realism … All is related in exuberant, theatrical prose” –  Daily Mail

“Throughout Pig’s Foot, Acosta remains in control of his narrative strands and large cast of characters. Subplots are introduced, pursued and resolved with an awareness of detail that seldom appears contrived. There is an ease about this book that will impress … Like so many coloured plates in the air, Acosta keeps his narratives spinning furiously yet also cohesively. It is an exciting yarn, often hilarious. One of the many set pieces is a brilliant confrontation in the filthy shack of a vicious outcast … Acosta is a natural storyteller, with an obvious love of theatre. This gusto is evident in the telling. His prose is simple and descriptive, and he loves exasperation as a medium and uses it to sustain the narrative pace. His characters scream, emote and battle with their feelings. The sex is symphonic, tempers flare and settle, and the dialogue is undercut by humour and a few confessional interludes. It seems unfair that instead of being assessed as another debut novel, Pig’s Foot, with all its verve, will be treated as a celebrity foray into fiction by one of the world’s finest ballet dancers … There is no denying Acosta’s achievement in creating a world that lives and breathes, one that is vibrantly expressed through Frank Wynne’s translation from the original Spanish. It may not seem quite fair that Acosta, who danced Spartacus and so many other roles with such grace, power and majestic artistry, should now also write a lively, delightfully engaging novel, yet he has. Pig’s Foot is as catchy as a piece of Cuban music, defers to Latin America’s literary tradition and shimmers with a likable swagger all its own” –  Eileen Battersby, Irish Times

“For all its manifest debt to Latin American so-called “magic realists” (Marquez, Borges, Vargas Llosa), the novel stands triumphantly on its own. In pages of salty-sweet prose, it traces five generations of a black family through Cuba’s tumultuous recent history … A narrative by turns lewd and poetic … The novel, very nicely translated by Frank Wynne, conjures the salt-eaten arcades and collapsing promenades of Havana wonderfully … A host of sharply drawn characters” –  Spectator

“It is no doubt a charismatic voice … Acosta does have an ear for a beautiful phrase, though. His descriptions of the Cuban landscape are elegant and seductive, and he brings the village to life with sensory evocations of eagle feathers, linden tea, sickle bushes, coconut rind and maracas. His huge array of characters, if fleeting in the throng of their melodrama, are at times exquisitely caught … Acosta also manages to weave in astute and heartfelt observations of Cuba’s socio-political story … The novel does have a gripping quality, which deepens towards the end as we are drawn towards the truth of Oscar’s tale. It is a wild, heady flight of imagination, and Acosta makes good use of his natural understanding of sequence and grace and suspense. He dances well on the page” –  Guardian

“As salty and pungent as Saturday night in the docks of Havana. It’s a cocktail of forbidden lust, murder and santeria, or Cuban voodoo … The surprise of Pig’s Foot is that a dancer can write fiction and write it well … Pig’s Foot proves that the celebrated hoofer knows a thing or two about telling stories … A breezily self-confident voice” –  Evening Standard

“An act of dance on the page: high-wire, electric, springing between place and time and character … The achievement of Pig’s Foot, its depth and range, history and humour, will assure him a wide and thrilled audience, entraced by the dancer’s agility with words” –  Harper’s Bazaar

“An enormously warm-hearted novel: tearful at times, triumphant at others. Acosta’s unflinching descriptions of his native country are so rich you feel you’ve been there. He’s a natural storyteller, weaving together the strands of a history that manages to be intimately personal and a vivid portrait of an emerging nation” –  Mail on Sunday

“A novel as salty and pungent as Saturday night in the docks of Havana. It’s a cocktail of forbidden lust, murder and Santeria, or Cuban voodoo … With Pig’s Foot Acosta proves a dancer can write fiction – and write it well” –  Scotland on Sunday

“Spellbinding … Acosta does for prose what he has done for the ballet, bringing to it a muscular sexiness and a rural saltiness that is translated with evident relish by the award-winning Frank Wynne … The rude jokes and the outlandish characters in Part One are magnificent … Despite my fears, this multi-talented individual turns out to be infuriatingly good at writing fiction, too” –  Independent on Sunday

“Acosta has as much a winning way with words as he ahs charm and presence on the ballet stage … Translated from the original Spanish by award-winning translator Frank Wynne, Acosta’s prose is poetic and raw. He conjures evocative landscapes … And conveys sympathy … Passionate and uncompromising to the end, Oscar exerts a powerful charm on the reader” –  The Lady

“When an acclaimed ballet dancer makes a foray into writing fiction, be prepared for it to be hailed as “sure-footed”. The good news is that Cuban star Carlos Acosta does, indeed, barely put a step wrong in his debut novel, Pig’s Foot, an exuberantly enjoyable tale” –  Financial Times