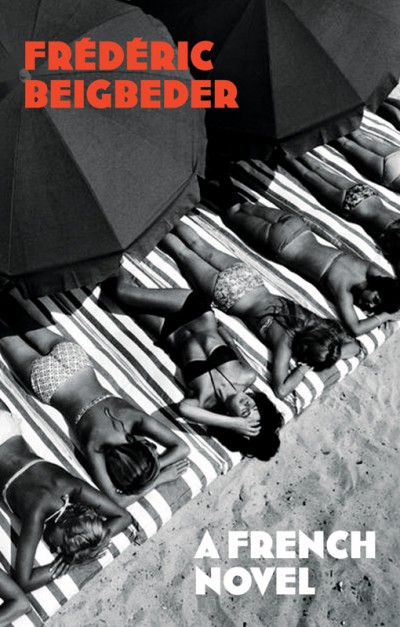 Arrested for snorting cocaine off a car bonnet, award-winning author and quintessential dilettante Frédéric Beigbeder reflects on his troubled childhood, while spending a night in the cells.

In his most autobiographical book to date, the author of the award-winning ‘Windows on the World’ recounts his stay in police custody, when in January 2008 he was arrested for snorting cocaine outside a Paris nightclub. As he lies in his cell, he revisits his childhood, from the carefree days when his grandfather taught him to skim pebbles at the beach in Cénitz, to his parents’ divorce; the conflicting influences of his hedonistic father and his studious, seemingly conventional brother. And then Beigbeder recalls his first, unrequited loves. This patchwork of memories is as much a portrait of the era as it is the story of a fragile, self-critical man who has finally dropped the mask.

Witty, sharp, with a pitiless, self-deprecating irony, and yet tender and true, ‘A French Novel’ is a gem. Beigbeder’s search for answers in the lost country of his childhood will speak to a whole generation searching for its soul.

A French Novel is published by Fourth Estate in June 2013

Praise for “A French Novel”

‘Despite it’s title, A French Novel seems to betray literary and hereditary Anglo Saxon roots; Beigbeder’s Gallic cynicism keeps getting undermined by a romantic sensibility that ultimately reminds me more of Fitzgerald than of Houellebecq.   A wry, funny and compelling novel from an important French novelist.’
– Jay McInerney

‘Cooler, self-mocking, but heartfelt as well as ingenious, Frédéric Beigbeder’s A French Novel (trans. Frank Wynne; Fourth Estate, £14.99) sees the French enfant terrible take his brief detention after a drugs bust as the cue for a romp, both comic and melancholy, though his own career of excess consumption, and that of postwar France.’
– Boyd Tonkin, Independent: Books of the Year 2013

‘In its mixture of wildness and rigour, exhaustion and rapture, impudence and earnestness,  A French Novel reminded this reader of – to adopt for a moment Beigbeder’s name-splattering style – Michel Houellebecq with a human face, Nabokov in both his huffy and dewy modes, Marcel Proust at his most Paul Morley-ish (‘Nutella has not yet arrived from Italy’).  Beigbeder’s gifts are remarkable but for a book so steeped in its native land and language to retain its exhilarating sharpness and jazziness of its juxtapositions requires the work of a translator no less rare.  Frank Wynne has shared prizes with Beigbeder in the past and again he finds the right pitch of measured mania..’
– Leo Robson, New Statesman