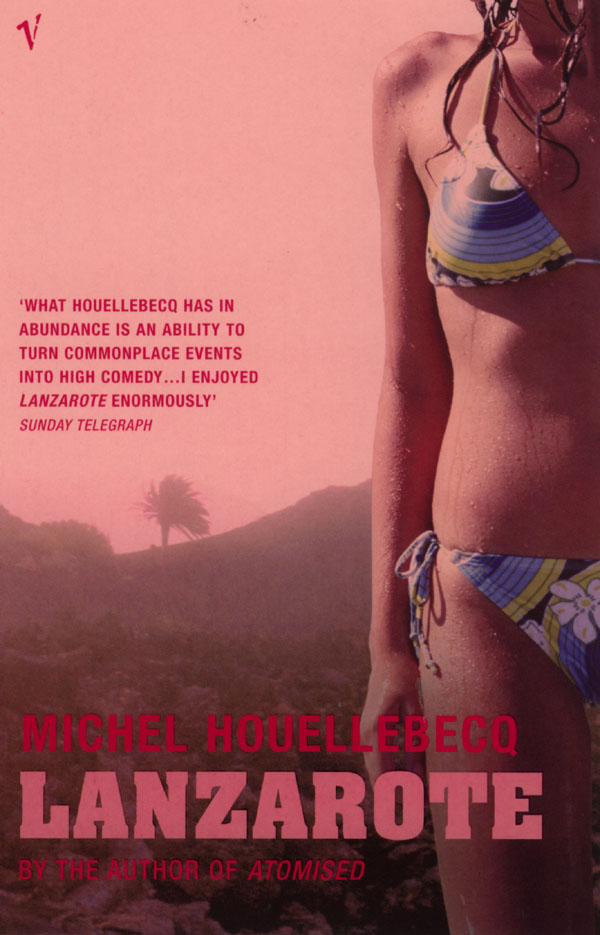 Though written before, Heinemann wisely decided to publish Houellebecq’s short novel Lanzarote after Platform – wisely because Lanzarote deals in miniature with many of the themes of the later book, and though the book has its share of excoriatingly brilliant humour, the slenderness means that does not have the same power.

If it is shock you’re after, you’re in safe hands; this acutely controversial author has even had his own “affaire”, a law case over his denunciations of Islam. Many will guiltily enjoy the dismissive, politically incorrect prejudices as narratorial hostility or disdain washes in turn over Belgium, Luxembourg, Norwegians, English tourists, four-wheel-drives, anti-smokers, priests, American imperialists, Muslims, the 20th century…
… The unnamed narrator is evidently a run-through for the one called Michel in Platform, and Lanzarote is indeed an earlier, sketchier composition than that terrifyingly far-reaching vision of the free world of globalisation, mass sex-tourism and fundamentalist terrorism (it chillingly anticipated the Bali bombing).
The Guardian

Call him what you will, but on the strength of his tiny latest book – barely 90 pages – and despite the disappointingly compromised ‘Platform’, michel Houellebecq remains unignorable. That’s largely due to the writing, which in Frank Wynne’s translation reads like a dream…”
Time Out

“Houellebecq is a debunker. He is a man who is deeply suspicious of most claims to higher intelligence, preferring to be lead-footed than to embrace the intellectual weightlessness of his countrymen. Since the revolution, the French have dreamed of constructing a society of happy and liberated citizens, purely by exercising a superior rationality. Houellebecq’s three novels to date have delighted in ridiculing this dream, arguing that a world that liberates human desires is far too complex to be understood by the human mind. Houellebecq counters airy intellectualism with a mordant common sense. He opposes the wilder forms of permissiveness with his own honest, self-deprecating libertarianism. In short, he offers nothing very different to, say, the late Auberon Waugh. True, Waugh championed the rights of the drinker and the smoker against political orthodoxy, while Houellebecq is more interested in the chronic masturbator and sexual obsessive. Yet there is a common philosophical ground here. I swear…

Houellebecq is respected in France but not loved. Perhaps this uneasy relationship with his compatriots fuels the bitter dystopian tendency in his work – a tendency that can easily be taken for misanthropy. In Britain, writers of the Auberon Waugh school never quite descend into bitterness: perhaps because they are buoyed by the affection of their countrymen. Houellebecq is more extreme because he is further out on a limb, and further along the road of self-hatred and despair.”
The Telegraph

“… what Houllebecq has in abundance is an ability to turn commonplace events into high comedy while keeping an undercurrent of desperation flowing along beneath. This is not simply an account of a holiday; it’s about people blindly pursuing hedonism while the earth threatens literally to split apart beneath them.
We are, Houellebecq is saying, so lulled by pleasure, so consumed by appetite, that we’re too groggy to notice that rationality is breaking down and things are falling apart at the seams.
At least I think that’s what he’s saying. And even if I’m not entirely sure, I enjoyed it enormously, whistling through it in under an hour, laughing a good deal, delighting in Houllebecq’s grouchy company and feeling as energised and light-headed at the end as if I’d knocked back several Matador Surprises.”
John Preston, Telegraph