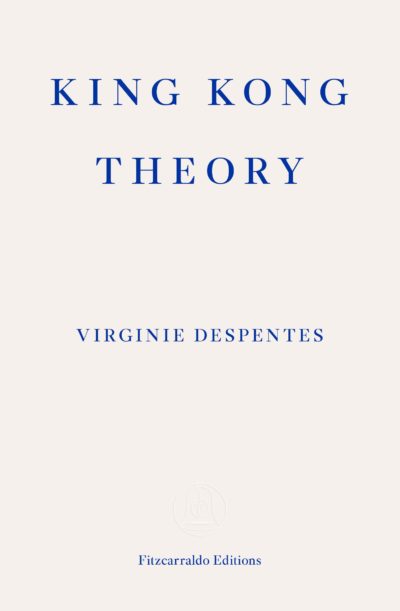 ‘I write from the realms of the ugly, for the ugly, the frigid, the unfucked and the unfuckables, all those excluded from the great meat market of female flesh, and for all those guys who don’t want to be protectors, for those who would like to be but don’t know how, for those who are not ambitious, competitive, or well-endowed. Because this ideal of the seductive white woman constantly being waved under our noses – well, I’m pretty sure it doesn’t exist.’
Powerful, provocative and personal, King Kong Theory is a candid account of how the author of Baise-moi came to be Virginie Despentes. Drawing from personal experience, Despentes shatters received ideas about rape and prostitution, and explodes common attitudes towards sex and gender. King Kong Theory is a manifesto for a new punk feminism, reissued here in a brilliant new translation by Frank Wynne.

‘I love King Kong Theory. It’s a fuck-you push-back against a blood-sucking patriarchal culture that keeps murdering and raping women till they get the idea (the survivors, ha) that they should be stupidly grateful to serve men, just lucky to even be allowed to play. This is liberatory galloping prose, inhale it now and if you’ve read it before read it again in this new jangling translation, ornery and alive like we need to be. This short fiery book is essential.’
— Eileen Myles, author of Chelsea Girls

‘In the dire age of corporatized and sanitised feminism, King Kong Theory is the radical – and darkly funny – manifesto we need.’
— Amelia Abraham, author of Queer Intentions

‘Despentes is often described as a “rock-and-roll” Balzac … She also resembles, by turns, William Gibson, George Eliot and Michel Houellebecq, with a sunnier attitude.’
— Chris Kraus, author of I Love Dick

‘Part-memoir, part-critical treatise on masculinity and power, with reference to rape, pornography, and prostitution, King Kong Theory is the kind of book you want to place in the hands of everyone you know. It is arresting from the very first lines; there’s something aggressively incantatory about it, a kind of battle-rap braggadocio.’
— Lauren Elkin, Harper’s

‘Wynne’s translation perfectly captures the radicality of Despentes’s manifesto as she discusses topics such as rape, sex work, and pornography with such confrontational panache that you feel as if the writer herself is screaming her words at you through a megaphone. The manifesto is already a classic but Wynne finally offers us a translation as brash and effortlessly cool as Despentes herself.’
— Barry Pierce, Irish Times

‘Despentes has become a kind of cult hero, a patron saint to invisible women: the monstrous and marginalized, the sodden, weary and wildly unemployable, the kind of woman who can scarcely be propped up let alone persuaded to lean in.’
— Parul Sehgal, New York Times

‘A prequel to #MeToo. A unique queer feminist radical voice that has been crucial to the transformation both of fiction writing and political action in the 2010s.’
— Paul B. Preciado, author of An Apartment on Uranus

‘A manifesto for our times.’
— Paris Review

‘Perhaps the most honest account of gender to have been written in the twenty-first century, King Kong Theory […] is a piece of work that has shaped perceptions of femininity globally. …The book also serves as a sort of prelude to #MeToo; it screamed the need for such a movement before social media did so.’
— W

‘The feminist movement needs King Kong Theory now more than ever. A must-read for every sex worker, tranny, punk, queer, john, academic, pornographer – and for all those people who dislike them too.’
— Annie Sprinkle

‘The history of literature in translation is filled with good and bad matches. Great matches – Juliets who get their Romeos, with not a single suicide along the way – are few. The new novel Vernon Subutex 1, written by Virginie Despentes and translated from French by Frank Wynne, is the kind of match that is so great it won’t occur to readers that these two entities – author and translator – might have ever been apart. In fact, their prose is so powerful, and so perfect, that we forget we’re even reading.’
— Jennifer Croft, LA Review of Books

‘[Despentes] redefined French feminism in her 2006 manifesto King Kong Theory. … Today King Kong Theory, with its account of Despentes’s rape, is the book she is most often asked to sign at events.’
— Angélique Chrisafis, Guardian

‘Virginie Despentes is a true original, a punk-rock George Eliot with a keen taste for the pitiable innards of her characters: no one else has her slyly penetrating eye, her spiky sense of humor, her razor wit that cuts like wire through the accumulated crud of our age’s default thought patterns.’
— Alexandra Kleeman, author of You Too Can Have a Body Like Mine

‘France has a long tradition of writers and artists who have propagated their own challenging visions of sexuality – from the Marquis de Sade’s sadomasochistic reveries to Georges Bataille’s explorations of the ambiguity of sex as a subversive force in Blue of Noon. More recently, Michel Houellebecq’s work has included unsparing descriptions of sexual conquest. But it is only relatively recently that women have felt able to tackle these same themes in public. … Despentes’s new book, King Kong Theory, gives them a manifesto. Part memoir, part political pamphlet, it is a furious condemnation of the “servility” of enforced femininity and was a bestseller in France – the title refers to her contention that she is “more King Kong than Kate Moss.”’
— Elizabeth Day, Observer

‘You have to take Despentes with a pinch of salt: her writing is often ambiguous and, in places, she is purposefully difficult, misleading and incongruous. This is also the book’s strength. She is restless, keen to move forward, and in doing so her prose is scatty, brilliant and unflinching.’
— Bryony White, Elephant

‘King Kong Theory still feels fresh, and it definitely shouldn’t fall out of print until its targets lose their stranglehold on women everywhere.’
— Megan Volpert, PopMatters

‘This is an important read for those wanting to hear from survivors of assault, as it presents a perspective that is not sanitised for the public eye. The manifesto should be read for what it is: the individual rallying against a system she knows she cannot win against, but similarly knows she can push against in a way that works for her and could, perhaps, work for those with similar beliefs.’
— Shameera Nair Lin, Lucy Writers