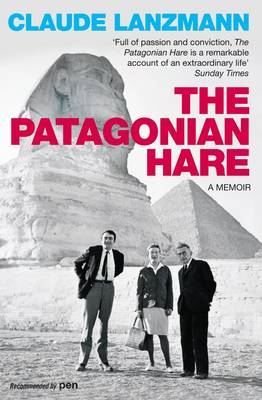 The Patagonian Hare has been shortlisted for the French-American/ Florence Gould Foundation translation prize. It’s an award for which I’m particularly honoured to be short-listed, since the jury is made up of some of the most talented and distinguished literary translators working in the language.

Lanzmann’s powerful, sprawling, sometimes eccentric, always compelling memoir is a chronicle of 20th century France and a moving meditation on the filming of his harrowing film Shoah.

The French-American Foundation and the Florence Gould Foundation announced the finalists for their 26th Annual Translation Prize for superior English translations of French works published in 2012.

All finalists will be recognized at the Annual Awards Ceremony on June 5, 2013 where the winning translator in each category will be announced and receive their $10,000 cash prize, funded by the Florence Gould Foundation.

// The Patagonian Hare by Claude Lanzmann and translated by Frank Wynne, Farrar, Straus and Giroux
These memoirs capture the intensity of the experiences of Claude Lanzmann, a man whose acts have always been a negation of resignation: a member of the Resistance at sixteen, a friend to Jean-Paul Sartre and a lover to Simone de Beauvoir, and the director of one of the most important films in the history of cinema, Shoah.

// Manhunts: A Philosophical History by Grégoire Chamayou and translated by Steven Rendall, Princeton University Press
Touching on issues of power, authority, and domination, Manhunts takes an in-depth look at the hunting of humans in the West, from ancient Sparta, through the Middle Ages, to the modern practices of chasing undocumented migrants.

// The Color of Power: Racial Coalitions and Political Power in Oakland by Frédérick Douzet and translated by George Holoch, University of Virginia Press
The Color of Power is a fascinating examination of the changing politics of race in Oakland, California. The city, once governed by a succession of black mayors and majority black city councils, must now accommodate rapidly growing Asian and Latino communities.

// In Defense of the Terror: Liberty or Death in the French Revolution by Sophie Wahnich and translated by David Fernbach, Verso Books
Sophie Wahnich offers us with this succinct essay a provocative reassessment of the Great Terror. She explains how, contrary to prevailing interpretations, the institution of Terror sought to put a brake on legitimate popular violence and was subsequently subsumed in a logic of war.

// The Metamorphoses of Kinship by Maurice Godelier and translated by Nora Scott, Verso Books
A masterwork of the anthropology of kinship by the heir to Levi-Strauss. Godelier argues that the changes of the last thirty years do not herald the disappearance or death agony of kinship, but rather its remarkable metamorphosis-one that, ironically, is bringing us closer to the “traditional” societies studied by ethnologists.

// HHhH by Laurent Binet and translated by Sam Taylor, Farrar, Straus and Giroux
A seemingly effortlessly blend of historical truth, personal memory, and Laurent Binet’s remarkable imagination, HHhH-a winner of the prestigious Prix Goncourt du Premier Roman-is a work at once thrilling and intellectually engrossing, a fast-paced novel of the Second World War.

// With the Animals by Noëlle Revaz and translated by W. Donald Wilson, Dalkey Archive Press
With the Animals, Noëlle Revaz’s schoking debut, is a novel of mud and blood whose linguistic audaciousness is matched only by its brutality, misanthropy, and gallows humor.

// Prehistoric Times by Eric Chevillard and translated by Alyson Waters, Archipelago Books
The characters in Prehistoric Times remind us of the inhabitants of Samuel Beckett’s world: dreamers who in their savage and deductive folly try to modify reality.

// We Monks and Soldiers by Lutz Bassmann and translated by Jordan Stump, University of Nebraska Press
While humanity seems to be fading around them, the members of a shadowy organization are doing their inadequate best to assist those experiencing their last moments. This remarkable work offers readers a thrilling entry into Bassmann’s numinous world.

// No One by Gwenaëlle Aubry and translated by Trista Selous, Tin House Books
No One is a fictional memoir in dictionary form that investigates the unstable identity of the author’s father, a lawyer affected by a disabling bipolar disorder. Letter by letter, Aubry gives shape and meaning to the father who had long disappeared from her view.

The Translation Prize is judged by a distinguished panel of jurors. Click here to learn more about the jury members.