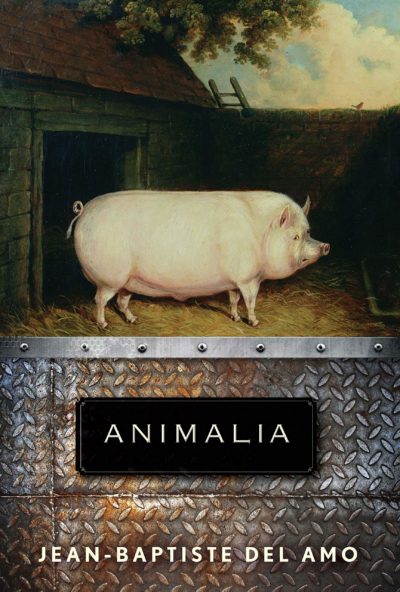 Animalia retraces the history of a modest peasant family through the twentieth century as they develop their small plot of land into an intensive pig farm. In an environment dominated by the omnipresence of animals, five generations endure the cataclysm of war, economic disasters, and the emergence of a brutal industrialism reflecting an ancestral tendency to violence. Only the enchanted realm of childhood―that of Eleonore, the matriarch, and that of Jerome, the last in the lineage―and the innate freedom of the animals offer any respite from the visible barbarity of humanity. Written in shifting prose that reflects the passage of time, with shades of Laszlo Krasznahorkai and Cormac McCarthy, Animalia is a powerful novel about man’s desire to conquer nature and the transmission of violence from one generation to the next.

“Powerful . . . This is not a novel that says just try to recycle a bit more: it is a book that confronts a reader with a stark moral reckoning of the costs of eating meat. There are characters too, but the main character, here, troubled and chased through these pages, is the farm. Fans of Édouard Louis will find a thrilling fellow-traveler here.”―John Freeman, Literary Hub

“Del Amo’s pungent, nightmarish English-language debut describes, in a mythic, arresting style, the bleak fates of a cursed family and the pigs they rear . . . The florid prose has an incantatory power well suited to the festering enmity, inhumanity, and majestic squalor on display. This uncompromising vision will leave readers breathless, thrilled, and exhausted.”―Publishers Weekly (starred review)

“Carnivores beware. Human and animal misery are evoked in unsparing detail in a dark saga of ruinous husbandry practices . . . Brilliantly, lyrically descriptive whether evoking the natural world or a decaying farmstead, the book traces the terrible evolution of rural ways of life into cruelty and abuse via the history of one unhappy family . . . Del Amo spares no details . . . An unstinting portrait of all that’s wrong with modern food production.”―Kirkus Reviews

“Award-winning Del Amo’s lyrical novel depicting a century on a French family farm emphasizes the earthy and the cruel . . . Artistically and provocatively dissects our conflicted relationship with the rest of the living world.”―Booklist

“Animalia is stupendously good. This is a novel of epic scope and equally epic ambition, and it is exhilarating and frightening to read. Every page blazes with incandescent prose. After reading Animalia it might be a while before I can return to reading a contemporary novel, I suspect everything will seem tepid and timid in comparison. Del Amo has thrown down a gauntlet: be bold, be daring, be rigorous, be a poet. A stunning book.”―Christos Tsiolkas, author of The Slap

“Animalia is a book about sex and violence, but it has unusual sobriety, and a story with a deep pull. The way it senses the natural world, in seed, vein, hair, grain, pore, bud, fluid is like nothing I’ve read.”―Daisy Hildyard, author of The Second Body

“This is an extraordinary book. A dark saga related in sprawling sentences, made denser still by obscure and difficult vocabulary . . . I was spellbound . . . The strangeness of the words, used with precision and scientific exactitude, slows your reading down, immersing you more in the scene on the page, and those scenes are so vividly imagined and conveyed . . . A kind of savage reimagining of Thomas Hardy and D.H. Lawrence.”―David Mills, Times (UK)

“If novels came with matching scratch-and-sniff stickers, this one would clear a bookshop within seconds. Dung, urine, mucus, blood, bile and every other bodily fluid spread noxiously across the pages of Animalia . . . Yes, this fourth novel by a rising star of French fiction stinks to high heaven. It is also compassionate, lyrical, angry, audacious, composed with a supercharged eloquence, and translated―by Frank Wynne―with dazzling virtuosity . . . Both halves of Animalia play whiffily brilliant variations on the time-worn motifs of the French rural novel, with its warring kindred rooted in a land that nurtures but curses them . . . Del Amo’s prose throws a bucket of slurry from some ‘unspeakable mire’ over the conventions of pastoral fiction. Yet he has plentiful passages of heart-lifting loveliness, as when an August harvest prompts Marcel to feel nature as ‘an indissoluble great whole.’ From first to last, ‘the cruelty of men’ emits its rancid stench. Thankfully, Del Amo lets us sniff the sweeter scents of tenderness and beauty too.”―Boyd Tonkin, Financial Times

“Likely to be hailed as a modern classic . . . A truly savage quality, all blood and stench and despair . . . Animalia is an important reminder that literature’s task is not necessarily to uplift, but to help us to attain a true understanding of our predicament.”―Ian Samson, Guardian

“Powerful . . . One of the most fascinating aspects of this novel is the way in which a sense of inevitability can loosen to allow for other possibilities and our perspective can be altered in unanticipated ways . . . Remarkable writing which is attentive to every moment, every sound and every silence―in a beautifully detailed translation by Frank Wynne.”―Irish Times

“Del Amo’s novel is a massive sensory experience; no detail is too small to let ferment. In certain respects, the village of Puy-Larroque stays unchanged from the 1900s to the Eighties; it steams with peat and semen and urine-soaked dirt . . . In all its implacable Gascon filth, Animalia reminds me of Zola’s Rougon-Macquart series; the later novels are set only 30 years before Eléonore’s birth, and rural France was not a land blessed by change . . . His descriptions are rich, but controlled, detached.”―Cal Revely-Calder, Telegraph