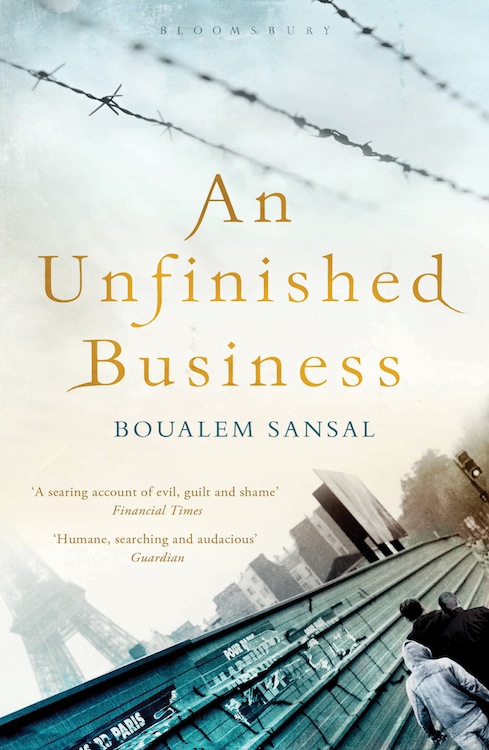 Runner up for the 2012 Scott Moncrieff Prize

Rachel and Malrich are the sons of a German father and an Algerian mother. Born in a small village in the Algerian hinterland, they are sent to Paris to be educated. Rachel excels under the French education system to become a successful businessman working for a multinational, but Malrich, 15 years younger, grows up in the banlieue, drops out of school and mixes with the wrong crowd. The brothers keep a wary distance from each other until the day their parents are killed in an Islamic fundamentalist raid.

When their father’s personal effects reach Paris, Rachel discovers that Hans Schiller was a reputed chemist before the war, who joined the Nazi party and then the Waffen SS. Posted to Auschwitz, he played an active part in the extermination of thousands of people. At the end of the war, he escaped to Egypt. There Nasser lent him to the burgeoning Algerian FLN, and after Independence, he settled in Ain Deb, where he started a family, enjoying the respect given to the mujahideen…

Rachel feels compelled to re-examine his heritage and so begins a journey full of foreboding back to Algeria, then on to Germany to trace his father’s past and to attempt to come to terms with the Shoah, one of the great taboos of Muslim culture. The attempt proves more than Rachel can bear, and it is left to the streetwise Malrich to take up the trail and complete his brother’s unfinished business.

Praise for “An Unfinished Business”

“A searing account of evil, guilt and shame”
Financial Times

This is a remarkable novel, and, given the author’s nationality, his continued residence in Algeria, and the response he dares to invite from the militant Islamists, a remarkably brave one. It is compelling and gripping. The horrors of man’s inhumanity to man are presented unblinkingly; we cannot avoid them, and no attempt is made to excuse or palliate them. But Malrich, though he ends by feeling all alone, brought to the realisation that “life is unbearably sad”. The mixed-up kid emerges from his ordeal a stoic, and undefeated.

“The flight of Nazi war criminals to South America is not unknown to fiction. That some Nazis remade themselves in the Arab world is perhaps less known, and lies behind Boualem Sansal’s humane, searching and audacious novel.

Set in the 1990s, between civil-war Algeria and run-down Paris suburbs festering with Islamist recruitment drives, An Unfinished Business is in part an attempt to rediscover the meaning of the Holocaust for a generation largely ignorant of it. In the process, it poses profound questions, from whether we bear responsibility for the sins of our fathers, to the individual’s ability and obligation to apply the lessons of history to their own lives.

It opens shockingly, with a youth recalling his elder brother’s recent suicide in Paris. Rachel and Malrich were born in Algeria to a German father and Algerian mother, who sent them to Paris as boys to live with a trusted couple on a sink estate. While Rachel excelled and worked for a multinational, his younger brother Malrich dropped out, becoming a regular in a jihadist mosque (“you’re hooked before you know it”), until he wised up. But after their elderly parents were slaughtered in a village massacre by Islamist militants, Rachel learned of his father’s SS past. Hans Schiller, a chemical engineer who made Zyklon B for the gas chambers, had escaped justice via Turkey and Egypt – where he worked for Colonel Nasser’s secret police – to Algeria, where he became a revered veteran of the fight for independence. For two obsessive years, Rachel tracked his father’s life all the way back to Auschwitz. For him, “to discover that you are the son of a murderer” meant “unending disgrace”, and led to his gassing himself with car exhaust fumes.

Rachel had kept the secret of their father’s past from his teenage brother, but bequeathed Malrich his diaries, with their shocking revelations. The novel consists of Malrich’s own journal as he follows Rachel’s painful journey, interspersed with extracts from Rachel’s diary. Although Malrich initially functions as a sceptical denier (“Papa was a chemical engineer not an executioner”), he comes to accept his brother’s testimony: “He saw the furnaces, saw them with his own fucking eyes.”

Both brothers draw parallels between Nazis and the new-style jihadists who forbid “talking to Jews, Christians, animists, communists, queers or journalists”, while banning “speed, blow, cigarettes, beer, pinball, sports, music, books, TV, movies”. As Malrich recalls, “they had faced up to the dictator and his men back at home . . . we liked the way they talked, like Allah’s rap crew . . . like superheroes fighting for the poor . . . they taught us how exciting it was to have people to hate, to want them dead so much it kept you awake at night.”

That hatred encompasses not only Jewish and Christian “Untermenschen”, but “the secular Muslim, the westernised Arab, the liberated woman . . . the queers, the junkies, the intellectuals who must be crushed by any means necessary”. While the parallel is not pushed to absurdity, it aids the young Malrich’s understanding of history, as he sees in death-camp inmates the shadow of Nadia, a teenager killed on the estate by the imam’s henchman for dressing freely and hanging about with “kaffirs”. This realisation galvanises him to fight the jihadists, mindful that “humanity is always failing, it never learns, it’s too much hassle”.

The contrasting diary styles are well captured in Frank Wynne’s translation. Anguished intellectual Rachel reads Primo Levi and spirals into self-destruction, while his more streetwise brother grasps when thought must give way to action against would-be leaders whose aim is “to scare people, to stop them thinking for themselves”. His combative common sense is an antidote to the sometimes hectoring Rachel, “doing my head in with all his preachifying”.

Sansal, who lives in Algiers, has objected to an edited version of history taught in Algerian schools. Malrich revolts against a “life of lies, of pretence, of ignorance and amnesia . . . Papa never told us anything, and when his turn came Rachel never told me anything. The authorities tell us nothing, they have broken our spirit.”

While this is not quite, as claimed, the first Arab novel to address the taboo of the Holocaust, others, such as Elias Khoury’s Gate of the Sun, have done so in the context of the Palestinian catastrophe. Sansal’s concern is less with understanding the Holocaust as the other side’s narrative than with absorbing its universal meaning to prevent recurrence in another guise. As Rachel writes: “Silence perpetuates a crime, gives it new life . . .”

Sansal published his first novel at the age of 50. Since 2006, when he wrote an essay entitled Poste Restante Algeria: An Open Letter to My Compatriots in Anger, his books have been banned there. This is his first to be translated into English. One hopes the rest will follow.”
Maya Jaggi, Guardian