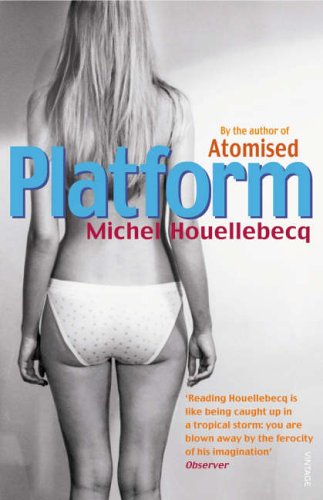 Michel Renault is a human void. Following the death of the father he barely knew, he endures his civil ser-
vice job while eking out an existence of prepackaged pleasure, hollow friendships, TV dinners, and pornography. On a group holiday in Thailand, however, he meets the shyly compelling Valérie, who soon pursues an agenda that Michel himself could never have thought possible: his own humanization.

Back in Paris, they plunge into an affair that strays into S&M, public sex, and partner swapping, even as they devise a scheme to save Valérie’s ailing travel company by capitalizing on the only trade Michel has seen flourish in the Third World. Before long, he quits his job, and their business model for “sex tourism” is gradually implemented. But when they return to Thailand, where Michel’s philosophy will be put into practice, he discovers that sex is neither the most consuming nor dangerous of passions . . .

From a suburbanized West crippled by hate crime to an East subsumed by materialism, Michel Houellebecq explores—with characteristic provocativeness, but also with surprising tenderness—the emotions that seem most resilient to any influence: love and hate. Platform is, as Anita Brookner has written, “a brilliant novel, casting a prescient eye on the abuses and inequalities that lead to wider trouble.”

Platform, Michel Houellebecq’s third novel, is to my mind his finest achievement  (though critics and sales figures favour Atomised). To my mind, the pared down narrative setting, the ferocity of the satire make this the work in which he most clearly and hilariously savages the folly of the twentieth century and presages the terrorist attack in Bali (which passage, weirdly, I translated while living on Bali).

“(the translation, throughout, is exemplary). […] There are problems with the narrative, officially a first-person account by Michel R., but one that (insolently ?—well, anyway, unjustifiedly) dodges into the third person if it needs to tell us what only Michel H. can know. (There is even an incompetent moment when Michel R. gives us his judgment on a character he hasn’t yet met.) […] The sense of Houellebecq’s being a clever man who is a less than clever novelist obtrudes most in the novel’s dealings with Islam.”
Julian Barnes, The New Yorker

“It is a novel of ideas, but if that phrase makes you want to reach for your pistol, it also comes with a well-crafted plot, a cast of fully fleshed characters and sex scenes that could stop the traffic. (…) Houellebecq adapts his writing well to the demands of his plot. His style is understated, deadpan and often explanatory, reminiscent of Sartre or Camus. The novel is very funny, but this does not detract from the tension.”
Toby Clements, Daily Telegraph

“For the smug British reader, Platform will seem nothing so much as a resurrection of the old anti-liberal, anti-semitic, anti-Dreyfusard tradition in French thought and society. Actually, continental liberalism is under assault from two directions. In reality, Michel is indistinguishable from his own bêtes noires, the unassimilated Muslims. His view of European culture — scary, over-feminised, lonely, demeaning, faithless — is that of the worst sort of low-grade Muslim propaganda. Whole sections of Platform reminded me of the Saudi newspapers of 20 years ago. Michel is the Muslims’ friend.”
James Buchan, The Guardian

“It addresses everything — love, death, religion, the nature of the individual, the meaning of life — but is coherent on nothing. (…) But if he is frequently incoherent in his general pronouncements, he is ingenious in his local insights.”
Christina Nehring, Harper’s

“Platform impresses mightily with its close-focus attention to the callous business of creating, and exploiting, the desires of all these clapped-out hedonists. (…) More surprisingly, the novel doesn’t merely run on irony and rancour. Michel’s rat-on-a-wheel Paris routine plangently captures the melancholy of sex-saturated consumer culture, with its victims trapped “like insects in lumps of amber”.”
Boyd Tonkin, The Independent

“Michel’s glimpse of lifelong happiness becomes a measure of the depths of the misery to which he will soon be violently returned. The novel ends in resignation and despair, but along the way it accommodates a skewed and lyrical vision of romantic longing and fulfillment. Céline would have been shocked — and perhaps a little jealous.”
Geoff Dyer, LA Weekly

“Platform is certainly full of witty, unhinged attacks against Islam — characters are introduced for no other reason than to deliver page-length denunciations of true believers. But Muslims ought not to be unduly offended. Houellebecq is a writer of perpetual attack. Protestants, capitalists, liberal-leftists, the revolutionary generation of 1968, the French, les Anglo-Saxons, hippies, Frederick Forsyth — all these are among his targets. There is considerable comedy in Houellebecq’s wild misanthropy. There is also a peculiar poignancy.”
Jason Cowley, New Statesman

“Platform is calculated to poke, prod, engorge, enrage and amuse the complacent reader of today. It’s dangerous in the way that literature is meant to be dangerous — that is, it awakens neglected sensibilities.”
The New York Observer

“Reading Platform, one realises again and again what a flimsy construct the self is, and how provisional is the manner in which we lead our lives. Western individualism teaches us that we are free to remake ourselves in whichever way we chose, that we are masters of our own destiny.”
Jason Cowley, The Observer

“For all his faults he pulls you along by his audacity and his verve. There is something new and rare here, a genuinely unsettling wit with a terrible tang of truth. His critics will see him as a reactionary populist, a kind of literary Eminem, but he is much better than that.”
George Walden, Sunday Telegraph

“The book is classic, gamy Houellebecq: witty, indigestible, willfully repellent and fiercely enjoyable. (…) Houellebecq has a gift for sleepy invective; he has contempt for both freedom and authority. But he’s like a bad date — brimming with rank charm but few useful judgments.”
Richard Lacayo, Time

“But what seems to hit the panic button, at least in America, is that Houellebecq has a genius at making you think he is on your side, that the two of you basically agree about the world and its iniquities, about what will help make things better. And then suddenly you wake up drunk, naked and committed to some repellent political notion, wondering how he got you there. Platform does this to you again and again”
Gavin McNett, The Washington Post

“Despite Houellebecq’s straightforward, almost breezy style, the problems he tackles are hardly simple or trivial. Less controversial issues may appear in the narrative, as when he discusses the state of the art world or the dangers of unfettered materialism. He proves to be especially adept at using dialogue to approach touchier issues such as corporate misconduct, sexual tourism, or Islamic fundamentalism.”
Steven Daniell, World Literature Today