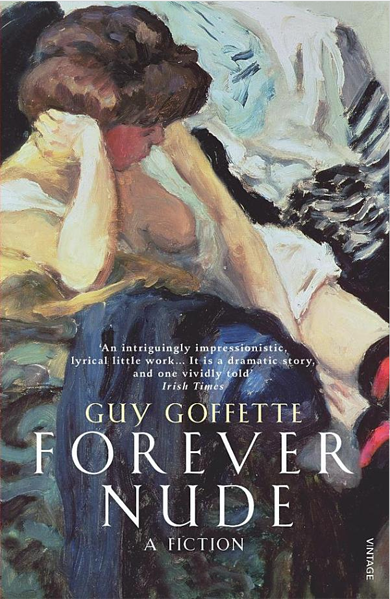 Guy Goffette is primarily a poet, something that is eminently clear in the prose books he has written, most of them – like this – are reimagined lives of painters and poets. Elle, par bonheur, et toujours nue (the title was untranslatable – I did suggest “She, by happy chance, forever nude”, but the publisher decided against it

The book re-imagines the life of painter Pierre Bonnard, from the moment he meets the woman who will be his life-long partner a farmer’s daughter named Marie, who tells him she is Marthe de Méligny, aristocratic daughter of Italian parents. For fifty years, she was Bonnard’s lover and his muse, she came to define his very palette. There are no nudes in Bonnard’s work before Marthe. Afterwards, her body, perched naked above a mirror of water, at her toilette, or in the languor after lovemaking would dominate his work. In a hundred and fifty paintings and more than seven hundred sketches, Pierre Bonnard would chronicle light falling onto Marthe, by happy chance, forever nude.

There are few ways of describing the tone, texture and depth of painting that do not expose the limits of language. In this novella about the life and work of Pierre Bonnard, Guy Goffette attempts a prose style that comes close to poetry. The water of the Seine is “dull as the discarded blade of a barber’s cut-throat razor”; Paris in the evening “looks like a frightened mouse scuttling along the skirting board”. At night, the city is “a shifting body of desire, tossing and turning between the sheets”. […] seductive and poignant. Goffette’s language turns descriptions of paint on canvas into the “warm, intoxicating colours of living flesh”.
Emily Stokes, Financial Times

…an intriguingly impressionistic, lyrical little work, one in which known, as well as less widely known, facts are presented within Goffette’s imaginative, subtle meditation of an artist’s life. Goffette has written a portrait of an artist which gently and perceptively attempts to enter Bonnard’s world without presuming to be intrusively definitive. […] At times the graceful, evocative narrative has echoes of Alain-Fournier’s classic Le Grand Meaulnes (1913).  […] It is a dramatic story, and one vividly told. Goffette’s technique is impressive; succeeding in being atmospheric, cinematic and dream-like despite the amount of fact. He makes little effort at characterisation and dialogue, relying instead on mood. Above all he gives breath to Bonnard’s independent artistic vision which lives through his glorious paintings. Here was an artist who belonged to no school and who always followed his impulses.
Eileen Battersby, The Irish Times