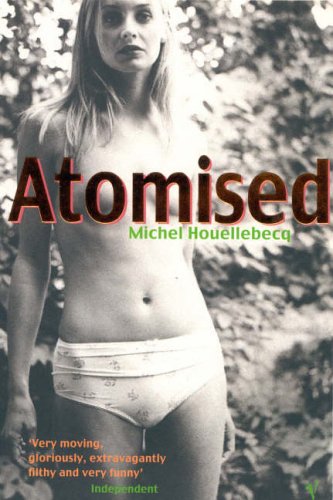 Michel Houellebecq’s second novel “Les Particules Élémentaires” was my second major translation. At the time, Houellebecq was a virtual unknown (even in France). In January 2000, Ravi Mirchandani  asked me  to read it and the first sentence of my  reader’s report for  Heinemann read:

“This is an extraordinary novel, in every possible sense of that word. Part dialectic, part polemic, part digest history of the twentieth century, it is funny, intelligent, infuriating, didactic, touching, visceral, explicit and, possibly, dangerous.”

But if I though it was unlike any novel I had ever read, my report also said: “The book is likely to garner equal loathing and admiration, and could certainly not be read without a fierce, passionate reaction one way or t’other.” Like most translations, I thought it would sell fewer than 5,000 copies and be largely ignored. How wrong I was – Atomised was a huge success in the UK  and the reviews were almost universally electrifying. It won the 2002 IMPAC Prize. This was the book which made it possible for me to become a full-time translator. 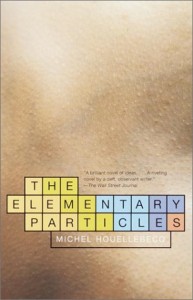 Praise for Atomised / The Elementary Particles

“Despite its daft ideas, The Elementary Particles is a fascinating read, aided by an exceptionally smooth translation by Frank Wynne. (…) Houellebecq brings impressive erudition and a gutsy willingness to offend to his attempt to re-think and re-imagine the bases for civilization.”
Steven Moore, The Washington Post

“Shot through with bleak aphoristic turns and splenetic intellectual asides and written in stabbing prose (translated with great finesse by Frank Wynne) Houellebecq has created a crash-course in metaphysics, molecular biology, history, ethics and popular culture from New Age rituals to women’s magazines. Atomised is also very, very funny. (…) Literature with a sure and unapologetic confidence in its own ability — its duty, even — to make a difference.”
Melanie McGrath, Evening Standard

“A nihilistic classic, in direct line of descent from La Rochefoucauld and Chamfort. You might hate it and wish you could forget it but you will know you won’t have wasted your time in reading it.”

“Again and again Houellebecq digs below our platitudes to expose the raw and uncomfortable feelings we are often afraid to admit to ourselves. His bitterness is that of the disappointed idealist. You may remain convinced that Houellebecq is wrong in his relentlessly bleak assessment of society and human nature. But the novel makes you re-examine your beliefs, which is the kind of bracing challenge that literature is for. This is a brave and rather magnificent book.”
Paul Gent, Sunday Telegraph

“Atomised is an ambitious novel of ideas, in which the characters casually comment on the decline of religion, the rise of consumerism and, most prominently, the corrosive effects of liberal individualism. What makes this tolerable, irresistible in fact, is the author’s supreme talent for illustrating his Left-conservative message with vivid scenes from a wide range of social milieus.”
Times Literary Supplement 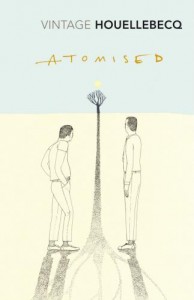 “To describe Michel Houellebecq’s extraordinary novel as nihilistic would be a grave understatement. (…) It allows little room for the reader to take issue with it, so defiantly pessimistic are its parameters and its conclusions.”
Alex Clark, The Guardian

“(A)gainst it, the contemporary British novel, with a few, scattered exceptions, suddenly seems timid, bogus, and footling. Not to mention atrociously written.”
Nicholas Lezard, The Guardian

“Unhealthy and haunting, rich and provocative, Atomised astonishes both as a novel of ideas and as the portrait of a society — a humanity — that has lost its ability to connect.”
The Independent

“(T)he big ideas and complicated structure are a lot to hang on Houellebecq’s thin and saturine characters. So the novel does end up as something of a pamphlet, too ponderous in its ideas and theories to succeed fully as a novel, too cranky to take seriously as a pamphlet. The translation by Frank Wynne is fluent and natural-sounding, though I notice that Wynne has now and then clouded the clarity of the cranky ideas.”
Paul Berman, The New Republic

“It is his knack of weaving grand themes into the most inauspicious material that gives Houellebecq his distinctive edge.”
James Harkin, New Statesman

“Clotted with confused theoretical speculations, The Elementary Particles is not a distinguished literary work; but it is a very knowing evocation of the night thoughts disturbing the slumber of the French centrist republic today.”
The New York Review of Books

“As a piece of writing, The Elementary Particles feels like a bad, self-conscious pastiche of Camus, Foucault and Bret Easton Ellis. And as a philosophical tract, it evinces a fiercely nihilistic, anti-humanistic vision built upon gross generalizations and ridiculously phony logic. It is a deeply repugnant read.”
Michiko Kakutani, The New York Times

“It sounds, no doubt, like a book from hell (…) But Atomised is far better than that. For a start, it has integrity. Houellebecq’s disgust and horror is not feigned. He is making serious points about the grimmer outcomes of the sexual revolution, the despair of the first sexual revolutionaries as their bodies age and they find they have failed to invest in companionship, family and the dense web of non-sexual connections that keep us fully alive.”
Andrew Marr, The Observer

“Often, in fact, reviewers have seemed at a loss for what to say, and little wonder: this novel speaks the language of profundity, but speaks it poorly, tenses incorrect, articles awry, phrases misplaced. (…) It must also be remarked that the novel is compulsively readable — readable almost in spite of itself — not for its profundity but for all the small verisimilitudinous touches against which structure and author seem pitched in Jacob-like struggle.”
James Sallis, Review of Contemporary Fiction

“American readers, accustomed to radical realism on a big scale, may be less impressed by the size of Houellebecq’s canvas than by the small, sad details that animate it. The Elementary Particles is grotesque and fantastical, full of loony physics, half-baked history and sociobiology, bad verse and sputtering misanthropy. It is also very funny, and sharply observed; but what makes it great satire, I think, is its childlike capacity for disappointment.”
Lorin Stein, Salon

“Apart from its pervasive, outrageous humour, the novel is hard to summarise. (…) It is certainly a novel of opinions, whether murmured, whined or roared.”
The Economist