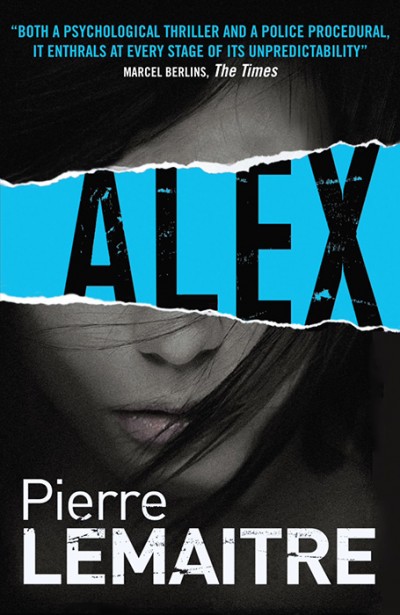 In kidnapping cases, the first few hours are crucial. After that, the chances of being found alive go from slim to nearly none. Alex Prévost – beautiful, resourceful, tough – may be no ordinary victim, but her time is running out. Commandant Camille Verhoeven and his detectives have nothing to go on: no suspect, no lead, rapidly diminishing hope. All they know is that a girl was snatched off the streets of Paris and bundled into a white van. The enigma that is the fate of Alex will keep Verhoeven guessing until the bitter, bitter end. And before long, saving her life will be the least of his worries.

A word from the CWA judges

For the first time, the judges have divided the CWA International Dagger between two books: Ghost Riders of Ordebec by Fred Vargas, translated by Siân Reynolds, and Alex by Pierre Lemaitre, translated by Frank Wynne. The prizes were awarded by Janet Lawrence, who chaired the judges.

Why? Because, say the judges, “for all the differences between these brilliant novels, they share—among their other qualities—an original and absorbing ability to leash incredulity in the name of the fictional contract between author and reader. From the strange presuppositions of their opening pages, these stylish writers – one newly translated, the other long established, give us crime novels with superb plotting, interesting actors old and new, good dialogue in the service of characterisation, leavened by humour (sometimes of the gallows), and always an ability to upset our preconceptions. From the sometimes outlandish imagination which is Fred Vargas to the painfully explicit, but never gratuitous, violence of Pierre Lemaitre, these novels demonstrate the variety and quality of international crime writing.”

Why have so few French writers of crime fiction made it here recently? Only Fred Vargas can be said to have successfully penetrated the British market. On the evidence of Alex, Pierre Lemaitre deserves to join her. Both a psychological thriller and a police procedural, it enthrals at every stage of its unpredictability. Alex, an attractive woman in her thirties, is kidnapped in broad daylight in a Parisian street, bundled into a van and taken to an empty hangar, where her captor has erected a fiendish wooden struc­ture in which,, naked, she’s imprisoned. Police commandant Camille Verhoeven, short in stature and temper, is put in charge of the investigation, even though his own wife had been killed by her kidnapper.

We expect a tense search for Alex’s whereabouts and a frenetic dash to rescue her. Instead, we’re drawn into asking differ­ent questions: who is Alex and who is the real victim of the drama? And just as we’ve grown used to that development, Lemaitre   conducts   another   brilliant, surprising final twist. Grippingly original … It enthralls at every stage of its unpredictability.
Marcel Berlins, The Times

Alex is the first work by award-winning French author Pierre Lemaître to be translated – superbly, by Frank Wynne – into English. At first, with a gorgeous woman who has a penchant for strange wigs and dines alone in Parisian restaurants, and a 4ft 11in detective with a host of eccentric colleagues, we seem to be about to disappear down the rabbit hole of self-conscious Gallic whimsy, but when the beautiful heroine, Alex, is kidnapped, something altogether more visceral and urgent takes over. Pint-sized detective Camille proves able enough, although he has an annoying habit of constantly favouring hunches over investigative rigour, and there is plenty of humour, but the images are distressing, with Alex being kept prisoner in a cage and subjected to a nightmarish Room 101‑type ordeal involving rats. Unlike many novels of this type in which the promise of a sensational premise fizzles out, there is a spectacular plot twist and the tension, along with the body count, mounts ever higher – an invigoratingly scary, one-sitting read
Laura Wilson, Guardian

‘The book moves from read-as-fast-as-you-can horror to an intricately plotted race to a dark truth’
Alison Flood, Guardian.

‘Harsh, fierce crime writing with a Gauloise tinge. It would not be out of place filmed in black-and-white by the late, lamented François Truffaut’
Geoffrey Wansell, Daily Mail.

“Here’s my advice. Go and acquire a 2013 diary and a pen. Flick to March 1st. Write in large letters “Alex by Pierre Lemaitre published this month by MacLehose- must beg, borrow, buy or steal this marvellous book” – well maybe not steal but you get my drift. Do it…now…”
Raven Crime Reads