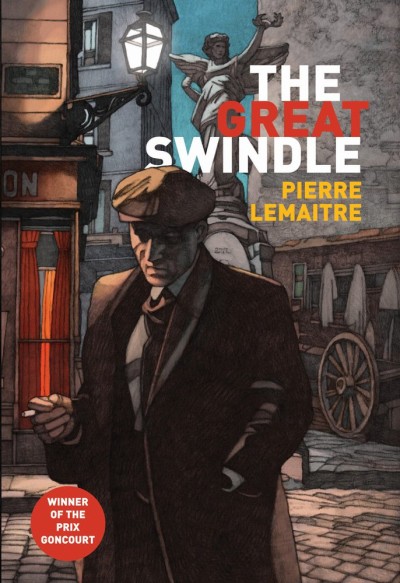 October 1918: the war on the Western Front is all but over. Desperate for one last chance of promotion, the ambitious Lieutenant Henri d’Aulnay Pradelle sends two scouts over the top, and secretly shoots them in the back to incite his men to heroic action once more.

And so is set in motion a series of devastating events that will inextricably bind together the fates and fortunes of Pradelle and the two soldiers who witness his crime: Albert Maillard and Édouard Péricourt.

Back in civilian life, Albert and Édouard struggle to adjust to a society whose reverence for its dead cannot quite match its resentment for those who survived. But the two soldiers conspire to enact an audacious form of revenge against the country that abandoned them to penury and despair, with a scheme to swindle the whole of France on an epic scale.

Meanwhile, believing her brother killed in action, Édouard’s sister Madeleine has married Pradelle, who is running a little scam of his own…

Praise for “The Great Swindle”

“The vast sweep of the novel and its array of extraordinary secondary characters have attracted comparisons with the works of Balzac, just as d’Aulnay Pradelle can easily be seen as Inspector Javert in Victor Hugo’s Les Misérables. Like those authors, Lemaitre is adept at describing the details of mental and physical suffering, and the smells of poverty.
Superbly translated by Frank Wynne, The Great Swindle … can be a tough read. But is also moving, angry, intelligent — and compulsive.”
Marcel Berlins, The Times

“Lemaitre’s novel is a rare synthesis of the tragic and the comic – and the book’s dénouement is a masterclass in nail-biting suspense. The author is at his best when probing the human condition. His portrait of a mind torn by the trauma of combat is uncannily accurate… Frank Wynne is a superb translator who always knows when to choose interpretation over the strictly literal.”
Edward Wilson, Independent

““The Great Swindle” … has important things to say about the dark, chaotic aftermath of World War I in France, [it] is a big, swirling tale that itself reads like a 19th-century novel. This book is thick with detail, immersing the reader in its elaborately bleak world … an irresistible story”
New York Times

‘A superb novel, from beginning to end!’
Huffington Post.
‘Lemaitre packs a real punch: captivating, deeply moving, The Great Swindle demonstrates his great talent as a writer. His writing is lively, controlled, original. This is a stunning novel that will not go unnoticed’ Lire.’After a stunning start, Lemaitre keeps up the pace from one end to the other of this fantastical, extraordinary novel, which lives up to all its early promise … Impossible to put down’ Livres Hebdo.
Lemaitre Prix Goncourt
FacebookTwitter